You have been summoned to the ultimate Pokémon showdown!

Giovanni, the leader of Team Rocket, enlists a group of scientists to help him in his quest for world domination. They clone Mew, a rare Pokémon, creating a superclone: Mewtwo!

But Mewtwo has no interest in being a laboratory specimen or being used for someone else’s gain. After making its escape, Mewtwo vows revenge. It challenges the best Pokémon Trainers to an epic battle—and of course, if talented Trainers are involved, Ash and Pikachu will be there!

Soon Ash uncovers Mewtwo’s real plans: to make an army of superclones and conquer the world! Pitted against the Trainers and their Pokémon, Mewtwo just might have to reconsider its aims, especially when faced with the power of the mysterious Mew! 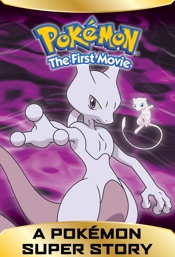