Sniper Hunter Powell thought he lost everything when he took the rap for a crime he didn't commit. Now he's got a chance to redeem himself. There's only one catch—he has to leave the military, settle down on a Montana ranch—and marry a woman he's never met before.

Jo Reed, the youngest of five sisters, is used to being underestimated, so when a hardened warrior shows up on her doorstep, she knows no one believes she's ready for love. Maybe they're right, but she's definitely ready for a home of her own and now she has someone to build it for her.

Building a house before the snow flies is a tall order, and convincing Jo to marry him doesn't seem much easier, but Hunter is ready for both challenges—

Until danger strikes Two Willows again—and threatens to destroy any chance at happiness that might be in his grasp. 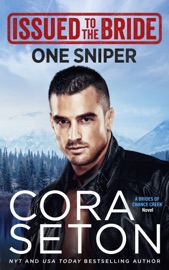