5 Romance Novels. 1 Epic Series. Are you addicted yet?

For three years, childhood best friends Lily Calloway & Loren Hale have been pretending to be in a real relationship to hide their addictions from their families.

She's addicted to sex.
Lily's compulsion leads her to one-night stands, steamy hookups and events she shamefully regrets. The only person who knows her secret happens to have one of his own.

He's addicted to booze.
Loren Hale's best friend is his bottle of bourbon. Lily comes at a close second.

As they sink beneath the weight of their addictions, they cling harder to their destructive relationship and wonder if a life together, for real, is better than a lie. Strangers and family begin to infiltrate their guarded lives, and with new challenges, they realize they may not just be addicted to alcohol and sex. Their real vice might be each other.

Together, they'll fight for their happily-ever-after against odds greater than themselves. The series spans years of time. Watch Lily & Lo grow up, grow old, and ultimately grow together because in the end, there's no Lo without Lily. No Lily without Lo.

"No one in this universe will be able to say your name without saying mine." - Loren Hale

♥ "The Addicted series is sexy, angsty, heart-wrenching, and incredibly endearing. It's addictive, unputdownable, and one of the best character-driven dramatic romances I have ever read." - Aestas Book Blog

♥ "Lifetime friends. Addicts. Lovers. Liars. And two of the most dysfunctional/flawed but amazing characters I have met." - The Crazy World of a Booklover 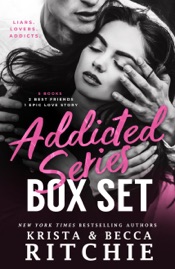