Americans constantly make moral judgments about presidents and foreign policy. Unfortunately, many of these assessments are poorly thought through. A president is either praised for the moral clarity of his statements or judged solely on the results of their actions. In Do Morals Matter?, Joseph S. Nye, Jr., one of the world's leading scholars of international relations, provides a concise yet penetrating analysis of the role of ethics in US foreign policy during the American era after 1945. Nye works through each presidency from FDR to Trump and scores their foreign policy on three ethical dimensions of their intentions, the means they used, and the consequences of their decisions. Alongside this, he also evaluates their leadership qualities, elaborating on which approaches work and which ones do not. Regardless of a president's policy preference, Nye shows that each one was not fully constrained by the structure of the system and actually had choices. He further notes the important ethical consequences of non-actions, such as Truman's willingness to accept stalemate in Korea rather than use nuclear weapons. Since we so often apply moral reasoning to foreign policy, Nye suggests how to do it better. Most importantly, presidents need to factor in both the political context and the availability of resources when deciding how to implement an ethical policy-especially in a future international system that presents not only great power competition from China and Russia, but a host of transnational threats: the illegal drug trade, infectious diseases, terrorism, cybercrime, and climate change. 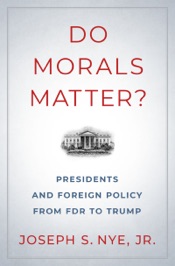