The award-winning history of 12 million German-speaking civilians in Europe who were driven from their homes after WWII: “a major achievement” (New Republic).

Immediately after the Second World War, the victorious Allies authorized the forced relocation of ethnic Germans from their homes across central and southern Europe to Germany. The numbers were almost unimaginable: between 12 and 14 million civilians, most of them women and children. And the losses were horrifying: at least five hundred thousand people, and perhaps many more, died while detained in former concentration camps, locked in trains, or after arriving in Germany malnourished, and homeless.

In this authoritative and objective account, historian R.M. Douglas examines an aspect of European history that few have wished to confront, exploring how the forced migrations were conceived, planned, and executed, and how their legacy reverberates throughout central Europe today. The first comprehensive history of this immense manmade catastrophe, Orderly and Humane is an important study of the largest recorded episode of what we now call "ethnic cleansing." It may also be the most significant untold story of the World War II. 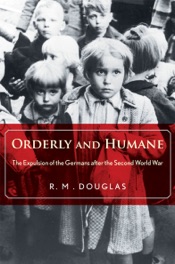