Every album begins with the germ of an idea, every song tells a story, and now it is finally revealed that there is a secret other worldly narrative behind Coldplay's newest hit album and its enigmatic title "Mylo Xyloto".

Three years ago, Coldplay and frontman Chris Martin teamed up with Mark Osborne (Kung Fu Panda, MORE, and the upcoming The Little Prince) to create Mylo's epic story that has gone on to inspire chart-toppers like "Every Teardrop Is a Waterfall," "Paradise," "Princess of China" and "Hurts Like Heaven" - which has its own MYLO XYLOTO COMIC themed music video.

Prepare to experience the world of Coldplay in a whole new way with this brand-new six-issue miniseries!. 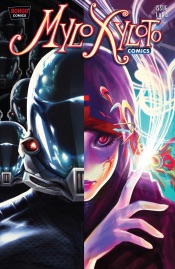