Here is a brief, well-written, and lively survey of the history of Southeast Asia from ancient times to the present, paying particular attention to the region's role in world history and the distinctive societies that arose in lands shaped by green fields and forests, blue rivers and seas. Craig Lockard shows how for several millennia Southeast Asians, living at the crossroads of Asia, enjoyed ever expanding connections to both China and India, and later developed maritime trading networks to the Middle East and Europe. He explores how the people of the region combined local and imported ideas to form unique cultures, reflected in such striking creations as Malay sailing craft, Javanese gamelan music, and batik cloth, classical Burmese and Cambodian architecture, and social structures in which women have often played unusually influential roles. Lockard describes colonization by Europeans and Americans between 1500 and 1914, tracing how the social, economic, and political frameworks inherited from the past, combined with active opposition to domination by foreign powers, enabled Southeast Asians to overcome many challenges and regain their independence after World War II. The book also relates how Malaysia, Singapore, Thailand, Indonesia, and Vietnam are now among the fastest growing economies in the world and play a critical role in today's global marketplace. 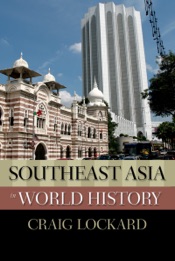